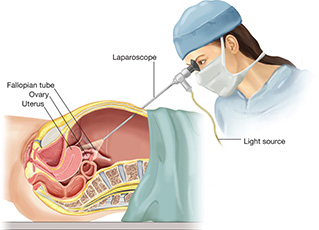 Laparoscopy is a way of performing a surgery. Instead of making a large incision (or cut) for certain operations, surgeons make tiny incisions and insert thin instruments and a camera into an area, such as into the abdomen, to view the internal organs and repair or remove tissue.

Laparoscopy was first performed in animals in the early 1900s, and the Swedish surgeon Jacobaeus coined the term laparoscopy (laparothorakoskopie) in 1901. However, better techniques were not developed until the 1960s, when laparoscopy was accepted as a safe and valuable procedure.

Early on, the technique of laparoscopy, sometimes referred to as keyhole surgery, was used only to diagnose conditions. Then doctors began to perform surgeries, such as tubal ligation in women using laparoscopy. The technique has evolved so much that operations that once required doctors to make a very large incision, such as to remove the gallbladder, can now all be done with this less invasive surgery.

For patients, laparoscopy can often mean a faster recovery from surgery, less time in the hospital or outpatient surgery center, and less trauma to the body. Doctors do not have to slice through large abdominal muscles to reach vital organs.